Serra Mesa is a San Diego neighborhood ideal for everyone that loves to be i the center of it. Serra Mesa has a great location. It is only about 7 miles from the coastline, homes are in high demand because the central location meets residents’ every need.  Serra Mesa’s central living is matched well with its city attractions, making it the perfect balance for those who want a close-knit community vibe and fun urban events.

Consists mainly of Mid-Century ranch style homes, other adjoining communities in Serra Mesa include Stonecrest Village and the newest community Civita Living.  All communities have condo’s and town-homes for those who want less yard. There are a variety of floorplans available to meet the needs of all residents, including couples, singles, and families.

Many new homes in the Civita Living development have energy-efficient fixtures, Serra Mesa boasts private backyards that offer space for peaceful relaxing.  Homes in Serra Mesa reside in prime locations; being the most central location in the city of San Diego. As well as being situated on several finger canyons where San Diego breezes flow into the homes and enjoy plethora hiking trails right from their back yards.

Because we know how expensive everything is in Serra Mesa and San Diego in general. Here is a site you can use to help you search for homes for rent in the area.

For the residents of Serra Mesa, there are many outdoor spaces to enjoy the California sun.

Serra Mesa Recreation Center hosts a myriad of events for locals to enjoy.  In the summer, visitors can catch free screenings of family movies, plus no-cost barbeques.  A fall festival has plenty of Halloween-themed activities like carnival games and a costume contest.  Residents can also use the picnic areas and play soccer or volleyball.

There are several ways to watch and play your favorites in Serra Mesa.  San Diego’s many golf courses offer greens to practice your swing and take in the gorgeous surroundings.  Qualcomm Stadium, south of the community, is where the San Diego State University Aztecs score touchdowns and the newest spring football team, The Fleet, has begun their season.  There are 64,000 seats to ensure an exciting atmosphere for all attendees.  Residents can rent out the stadium for weddings, birthdays, and other festivities. Famous singers like Beyonce, Madonna and the Beach boys have been featured artists at Qualcomm. Used-car sales, go-kart racing and recreational vehicle trade shows are also popular events here, making it much more than a sporting arena. 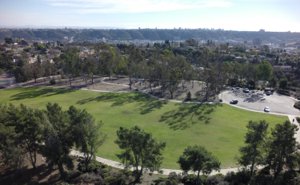 Shopping and dining opportunities are diverse here and the surrounding areas of Civita, Mission City and Mission Valley. Meaning the latest fashions or new cuisines are just a short drive down the hill.  Restaurants in the serve a myriad of dishes to suit all tastes, such as sushi, Mexican, burgers, the very popular Bear Buns Bakery and Maggies Cafe so be sure to visit soon.  The local dentist is a hit with residents too. They even have their own Facebook page, Serra Mesa Spotlight be sure to check it out because visiting a neighborhood online should be your first step before moving there physically. The page has updates on hyper local happenings as often as possible.

The area was originally part of the Mission Rancho Lands of San Diego granted to the Catholic Church by the King of Spain. When the Missions lost their church power in 1834, by Mexico rule, the land was granted to various influential men, including Don Santiago Argüello.  After his death his family tried to hold the land as long as possible. Yet, were eventually forced to divide and sell 15,999 acres (65 km2) of land.[1]

This scrubby mesa later settled by various ranchers and homesteaders. It was mainly used for grazing cattle until World War I, when the Army founded Camp Kearny. Bill Gibbs established an airfield in 1937, which in 1947 was renamed to Montgomery Field.

The community began after the Korean War, when the Navy built its Cabrillo Heights housing project in Kearny Mesa in the 1950s.  Surrounding development occurred thereafter, most between 1955 and 1965.

Mission Village had the distinction of being located within reasonable proximity of its namesake, the Mission San Diego de Alcala. Serra Mesa is named for Spanish friar Junipero Serra. Birdland derives its designation from the fact that it was laid out with streets named after birds.

Includes the neighborhoods of Serra Mesa and Kearny Mesa. The latter is home to three hospitals (Sharp Memorial, Sharp Mary Birch Hospital for Women and Newborns, and Rady Children’s), including two of the six designated trauma centers in San Diego County as well as the only women’s hospital and the only hospital dedicated solely to pediatric care.

Six acres of the Civita development (formerly Quarry Falls), and the western slope of Murphy Canyon fall within Zip Code 92123. In 2016 Civita ultimately rezoned their zip code and joined as a community of Mission Valley, 92108.

Developers Had Their Way

The streets of Serra Mesa bare the names of developers family members, friends, pets, favorite places or things. One builder settled on Haveteur Way or “have it your way”, because they wanted to settle a dispute.

In June of 1961 the Cabrillo Mission Community Council held a contest to name all of the communities from Birdland to Mission Village. Mrs. John Dowling submitted the winning entry, Serra Mesa. So she won a prize of a $25 savings bond and a $10 gift certificate! The City Council acted swiftly to ratify the selection, and from that day forward the entire community has been known as Serra Mesa. 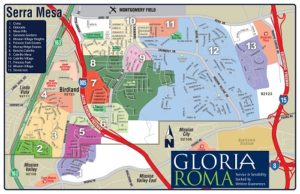 The Mission Village –12 neighborhood have names that use I, II, III so on so forth according to the cluster and age of the homes. The entire community of Mission Village comprises the east side of Sandrock Rd with a little cut out for Ranch Cabrillo and Cabrillo Mesa in the middle of the canyon encircled peninsula that crosses Mobley St, a full length NS street on the penninsula. The Serra Mesa tracts have abundant community names because there was so many developers.

Serra Mesa…depends on who you talk to

Stonecrest Village -13, a development created in the 70’s but not developed until the late 90’s (W of the 15 fwy and east of the Serra Mesa canyons above). Stonecrest is so different than Serra Mesa, most residents agree that Stonecrest is not really a part of Serra Mesa.  Another Serra Mesa community that residents agree is not unanimously considered to be Serra Mesa is Birdland (w of the 805 and E of the 163 fwy). Mainly because there is a freeway and canyon dividing it from Serra Mesa. Birdland is made up of 3 additional communities. They are Eldorado -2, the most southern community in Birdland. Mesa Hills -3 (N or Eldorado and S of Genese Gardens). Genesee Gardens -4, the most northern community in Birdland.

All of the Serra Mesa tracts were the creation of developers who were largely oblivious to modern concepts of community planning. Because of this, clusters of houses are here and there with little or no rhyme or reason.  Except that the land was cheap and the parents of baby boomers were in search of nests. The advent of the freeways and imported water also contributed to the sudden expanse of tract housing on the barren mesa.

When you talk to the residents they’ll make it very clear to you whether they live in Serra Mesa or Mission Village.  Both are in the same basic area and both areas have homes between the ages of 1958-1961. There is no clear line of delineation, especially when you look at the entire community development. Though, if you have not visited and you listen to the residents…one would think that the homes were very different in style and construction. They aren’t; all of the homes are mid-century modern homes all ranging from 1000 square feet to as much as 1600.

As a Realtor who has lived in Serra Mesa and has sold many homes in the area. The only obvious difference is that most homes in Serra Mesa have raised foundations featuring hardwood floors. Whereas most of the homes in Mission Village have slab foundations. The larger homes are large because they usually have an indoor patio or similar built as an add-on soon after the homeowners moved in.

Things to do:  Hiking highlights for include the Ruffin Canyon and Sandrock Canyon open spaces. So, go for breakfast at Bear Bun Bakery. While in the area, enjoy happy hour at Maggies Mexican Café or enjoy a game at the Q…that is, until SDSU’s entrance some time in the next decade. Visit Serra Mesa’s Kokoro restaurant, whose delectably delicious Japanese food will delight even the most scrutinizing of palates.

Mid-century Bomb Shelter in garage: When she inherited the home from her relative, like a lot of Serra Mesa adults of Baby boomers, she didn’t realize what surprises lurked beneath her garage floor.

Find Out How Much Your Home is Worth

Gloria is an accomplished Realtor with over 27 years of cumulative experience in real estate and finance. If you’re buying, Gloria knows how to help you, having been awarded as the TOP 3 Buyers Agent in America. If you’re selling, her showcased estates SELL for up to 18% higher with Gloria’s Proven Home Selling System.