has been serving up Mex-American-style breakfast, lunch and dinner in San Diego’s Serra Mesa community since 2014, but this spring the restaurant will launch a new location in Barrio Logan.

Husband-and-wife David and Argelia Granda have both been working in the food industry since they were teenagers. In 2010, the couple decided it was time to follow their dreams of opening their own eatery and started a deli on Friars Road in Grantville. After four years, they sold the deli and Maggie’s Café was born in November 2014.

“Maggie’s is named after David’s mother,” explained Argelia Granda. “She is a person that loves the kitchen and everything she prepares tastes like heaven. She is the kind of person that will show her love through her food. Maggie’s dream was always to have her own restaurant. She stared selling tamales through the streets of Barrio Logan and outside the store fronts of some local markets.  Over the years she attempted to open a small 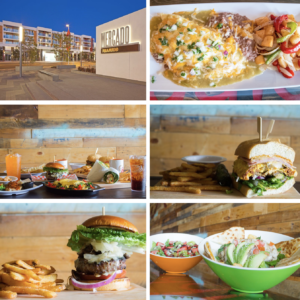 fondita, but life did not favor her.

When the opportunity was presented to us to have our own restaurant, we decided to name it after her to honor her hard work and dedication to her family and food. We also wanted Maggie’s Café to reflect her personality of welcoming, family and good food.”

The second location of Maggie’s Cafe will open within the Mercado del Barrio that last housed Fathom Crossfit. The restaurant will offer 3,000 square-feet of indoor dining space with an 800 square-foot outdoor patio overlooking the Coronado Bridge. The restaurant will offer a family-friendly atmosphere with plenty of televisions and an all-day menu of breakfast, lunch and dinner options.

Guest favorites include the South of the Border Benedict (an English muffin topped with a chorizo patty, avocado, poached egg, and a Chipotle hollandaise sauce, served with Maggie’s potatoes and fruit). The Chile Verde Omelet (carne asada, onions, and cilantro omelet, smothered in homemade green salsa, and served with Maggie’s potatoes, beans, and choice of bread or tortillas). They offer a variety of certified Angus beef burgers. The restaurant will also serve mimosas, margaritas, micheladas, and lots of local beers.

“We want to thank Mercado del Barrio owners Shea Properties for believing in us and supporting us on opening our doors in Barrio Logan,” continued Argelia Granda and cannot be more proud, excited and blessed to be part of this great community. Many great moments are going to happen and we hope that the community enjoys our food, hospitality, and drinks!”

Maggie’s Cafe is expected to open at 1985 National Avenue, Suite 1129, in San Diego’s historic Barrio Logan community in May 2019. For more information, visit their website here and stop by the original location at 3232 Greyling Drive in Serra Mesa.

Serra Mesa neighbors are fed up with vandals marking up their property with spray paint. They are not wasting any time taking action to remove the graffiti themselves, which is what law enforcement encourages them to do.

Jones Elementary School had two written marks on the wall and a third on an electrical box on its front lawn.

“It could be the marker’s initials,” said one neighbor who was afraid to show and tell us her identity for fear of the tagger retaliating against her. She has been a Serra Mesa resident for 40 years. The neighbor bought a can of graffiti remover, called Goof Off, and sprayed it all over the electric box. “Oh, it’s coming off now,” she said, scrubbing hard to get the “goof out” of her neighborhood.

She also showed NBC 7 a picture of the two other tags on the school’s wall that she said she emailed the principal about a few days ago. The principal has already had it removed. A fence on public property about a block away from the school was also tagged with the same two red letters.

-Everyone was affected by this act of defiance

The Christian Fellowship Church had the same two letters written in three different locations on the church property. The markings were on a white side wall, a concrete wall, and a blue entry sign. “I already painted over the wall here, and the entry sign,” said church member, Rick Bussard. “Just frustrating… especially, attacking a church. You can see they have no fear of God, no fear of property.”  The church paid for the supplies to paint over it, while Bussard volunteered his time to clean it up.

All the tags had been marked over the last few days, something Serra Mesa neighbors say they have not seen in many years. Neighbors said in the past, marks have been made on electric boxes. The city has paid for local artists’ painting supplies to paint over it and make it an artistic statement in the community.

said if someone sees graffiti on property where it does not belong, they should take a picture and then report it to police. They also recommend not waiting for police or the city to fix it. The department asks residents to remove it or paint over it immediately, if they can. They should  document it so that the tagger does not get any recognition for their work. Police also said if the tagger is caught they will be charged with a misdemeanor. If the amount of property damage adds to more than $1,000 then the tagger could be charged with felony vandalism, SDPD said.

A local baker is warming everyone up on one of the coldest weeks of the year. Bear buns bakery in Serra Mesa is a family owned business that specializes in organic coffee, sticky buns, cinnamon rolls and fresh muffins daily.  Heather Lake of Fox 5 news gives us a look inside this local spot. It’s National Muffin Day. Not usually one to celebrate these ‘national’ whatever days but I happen to come across this wonderful place named the ‘Bear Buns Café’ in Serra Mesa. 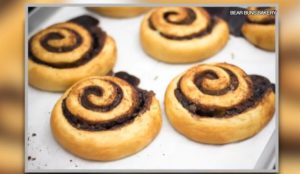 The owners of this café are so talented at making these amazing goodies like Betty Crocker used to make. They make you feel all cozy inside because it’s raining and freezing outside. My phone says it’s 39 degrees in Serra Mesa, so we are going to warm you up a bit.

We are going to show you what the Bear Buns Bakery is famous for, alright.  Ashli, one of the co-owners and head baker is showing us their cinnamon rolls and sticky buns. She says they have a group of regulars who come in for their muffins and coffee. In addition to their cinnamon rolls they offer breakfast sandwiches. She has a really good support system in Serra Mesa locals.

Heather wants to know what makes them taste so good. Ashli admits that it’s lots’ of butter and sugar, which is core of every great baked food. It’s what people want so it’s what they have to do to make their clientele happy. Their patrons enjoy the home feeling of a stand alone building that’s not in a strip mall. It’s old fashion and feels very comfortable. Ashli adds ‘the scents of coffee and cinnamon rolls, of course keeps them coming.’

They offer a special muffin every month. The flavors they are featuring today are; blueberry, chocolate, raspberry, cranberry-orange, banana-walnut-chocolate chip. Heather says,’Where is a fork, I need a fork!’.

Find Out How Much Your Home is Worth 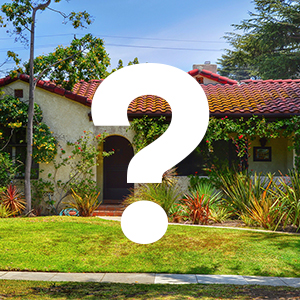 Gloria is an accomplished Realtor with over 27 years of cumulative experience in real estate and finance. If you’re buying, Gloria knows how to help you, having been awarded as the TOP 3 Buyers Agent in America. If you’re selling, her showcased estates SELL for up to 18% higher with Gloria’s Proven Home Selling System.